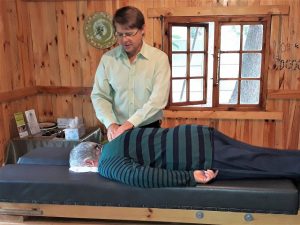 What is Body Stress Release?

Body stress is a powerful factor in all our lives and can undermine our health and well-being in many ways. Every day we are exposed to different types of stress:

Our bodies are designed to adapt to these stresses in a positive way but sometimes we find ourselves overloaded by stress. In an effort to cope with this overload, the body stores the stress in the muscles. This is what we call “body stress”.

Body stress can lead to pain, stiffness, postural distortion, numbness and cramp. Tension in the muscles can put pressure on your nerves which disturbs your body’s communication system. This reduces the efficiency of your body’s natural self-healing ability.

How can body stress release help me?

Other conditions that have improved with Body Stress Release include:

Note: Body Stress Release is not a diagnosis or treatment of any condition. It simply assists with locating and releasing stored tension from the muscles.

Make an appointment or ask Richard a question

Aches and Pains
“I spent most of my festive season moving furniture and heavy items, as well as painting the inside of my mom’s house, which meant up and down ladders and a lot of pressure on my knees and lower back. Needless to say, even though I have always been quite physically strong, I started feeling the after affects a while later. My knees were sore, my lower back was aching and I was just generally feeling about 10 years older than I was. I kept looking at people my age and wondering why I didn’t feel like they looked.
I was very fortunate enough to be able to receive Body Stress Release sessions with Richard. I firstly had three in a row within 3 days of each other and now once a week. I can honestly say, that by the third treatment, I was feeling like a different person. My knees were much better, my energy was greatly increased and where before I would be forced out of bed in the mornings because my back was so sore, it felt amazingly better. Richard is a gifted practitioner and I can highly recommend his work. He is also very passionate about his work and helping his clients” – Carol

” I have had  Body Stress Release sessions with Richard Pickard-Cambridge and am amazed at how effective it has been.
Initially I went to Richard for lower back pain issues, which has improved substantially, but have noticed other significant shifts and
improvements in other areas as well. On the emotional level, my stress levels decreased. I felt more positive, calm and balanced mentally as well as physically. Along with my lower back pain virtually disappearing, my neck and shoulders are more relaxed, my posture seems to be improving and I no longer have constipation. I can highly recommend Richard; his explanation of how he facilitates the body’s ability to heal itself, along with his expertise and professionalism have made a noticeable and valuable difference to my mind. I do recommend that you take the prerequisite 3 sessions in order for BodyStress Release to work effectively. The results and rewards are well worth it.” Joanne Jardine

Headaches/Migraines
“My son came home from school nearly every day with a headache. It came on after lunch and when he went to bed at night it was still there. Pain killers from the GP helped, but he couldn’t live like that for the rest of his life. After only four sessions of Body Stress Release, his headaches have gone. He smiles and plays again like he used to. We are both so grateful for your help.” – Gill S, Mother re her son aged 12

Determination of Strengths, weaknesses and potential.......
Brainstorming......
Planning and Goal Setting.......
Support and Mentoring along the way